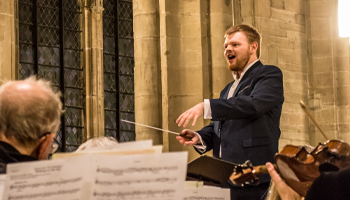 Since graduation in 2014, Seb has worked as a musical director, conductor, arranger and vocal coach, working with choirs of all sizes, and Orchestral ensembles. Seb also makes many recordings in his home studio producing choir 'guide tracks'. Lockdown in 2020 has also seen Seb develop new digital skills spending an increasing amount of time producing ‘virtual choirs’ as well as developing a mobile app to support remote community singing (onlineconductor.app). Seb is also a keen performer, his main instrument percussion, which has led to performing in prestigious concert halls (Including O2 Arena London, and the Royal Albert Hall) and around the world. Seb has also recently joined the a tap dancing class!

Seb Farrall graduated from Coventry University in 2014 with a first-class degree in Music Composition, and the Robert Ramskill composition award for ‘significant contribution to the department’. Seb's composition tutor was leading experimental composer Chris Hobbs. While studying at Coventry, Seb conducted the department’s orchestra as student conductor for several years with tuition from Chris Evans and was involved in many successful composition and conducting projects.

The biggest contribution to Seb's degree success was final collaborative project, MenCho, where Seb and co-founder Jon Welling formed together the MenCho Men's Chorus at the start of 2014. Starting a community ensemble as part of a degree project was a big risk, while most lecturers though it was an excellent idea, others were keen to point out that it was potentially foolish with both degrees on the line. Jon and Seb both agreed that it was a risk worth taking and, fortunately, it paid off.

Shortly after MenCho reached it's end, Seb was contacted by the Workplace Choir Company, and asked to help with the London Taxi Company's Black Cab Choir.  Since 2014, Seb’s excellent reputation as a conductor has continued to grow, and he is delighted now to be Musical Director of a number of ensembles in Warwickshire, including Sing it Loud, Coventry Philharmonic Singers, Burton Green Village Choir, Earlsdon Park Village Singers, The Coventry City Salvation Army Songster Brigade, and the Bad Vibrations Singing Group. The proving ground was MenCho, and the phone didn't stop ringing.

During the Covid-19 lockdown of 2020 Seb became somewhat adept at creating virtual choirs and video production went through the roof. The first was (Something Inside) So Strong (Sing it Loud), and many...many(!) virtual choir performances later culminated in two 'virtual concerts'. Sing it Loud and the Kenilworth Lions. Another concert was squeezed out in Spring 2021 deemed to be the last.......(fingers crossed!)

To help with creating virtual choirs, Seb also developed an app - onlineconductor.app. While Seb was always keen on technology, he didn't ever imagine that this passion and natural skill would tie in so well with music making.


Seb's approach very much hinges on extracting musicality from ink on a page and transforming it into something with colour and life. Playing/singing the right notes is the easy bit, and is frankly possible without a conductor. It’s also important when in the community setting that rehearsals are enjoyable; Seb works hard to ensure people always leave rehearsals in a positive frame of mind, eager to return the following week and perhaps even practice once or twice. This comes, in part, from a healthy injection of humour, well-structured rehearsals and solid musical achievements. The angry conductor routine doesn’t work; people make much better music  from a place of encouragement and comfort. If the music is good, everyone is happy and vice versa – there are no losers! That doesn’t mean mistakes aren't corrected or standards are lowered, but feedback comes from a positive encouraging (maybe humorous!) stance, and not a harsh or critical one. This works well long-term, because as musicianship is developed, the ensemble as a whole becomes stronger.

Kenilworth Lions Carols in the Clouds | 2020 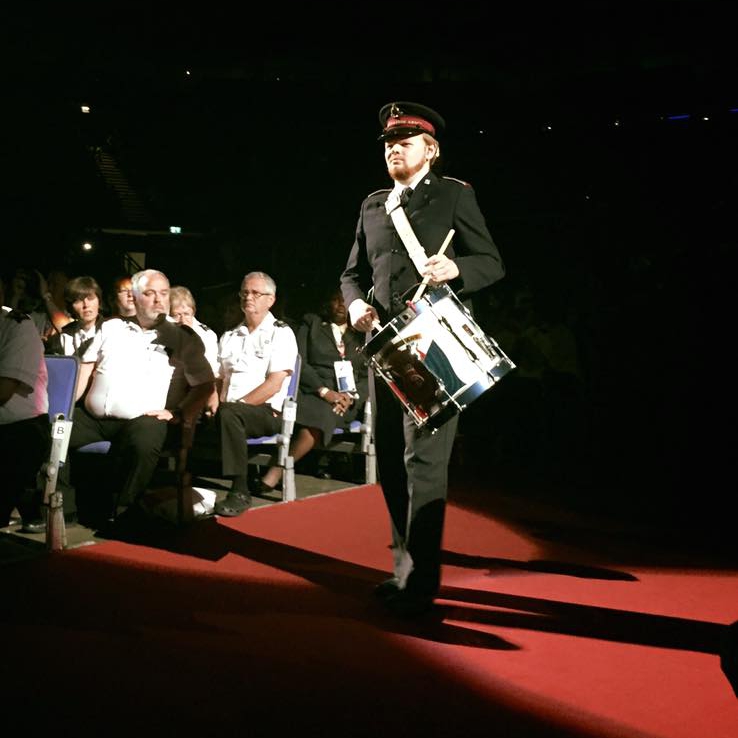 Now living in Coventry, Seb grew up in Bristol, went to St. Mary Redcliffe and Temple School, and attended the Bristol Easton Salvation Army. All of which helped in forming his character and abilities today.

As with most 'Salvationists', Seb's performing debut was with the Salvation Army, in the junior choir known as the 'Singing Company' at the age of 6. Regular performances with the group in Bristol's Colston Hall took away any performance anxiety!

Seb's first ensemble performance was with the Kingswood Music Centre Wind Band. Invited by his primary school trumpet teacher, John Watkys, Seb joined the Wind band playing percussion. The music Centre was a happy place, where many many hours were spent making music with like minded peers with direction from influential teachers and excellent musical role-models. 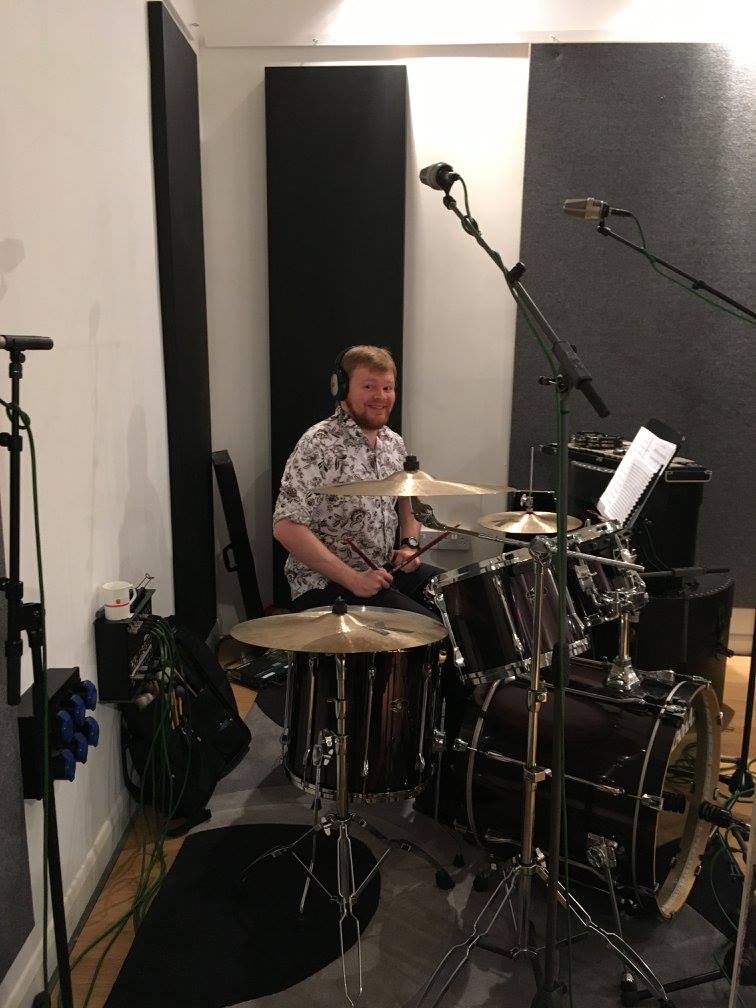 Initially drawn by the appeal of playing Phantom of the Opera Seb helped out his parents orchestra, The Bristol Millennium Orchestra, in his first performance with an adult ensemble. The annual concert was a favourite of the group, Proms in the Meadow - Iron Acton, as the entire village would gather and join in the festivities. The percussionist space wasn't filled, so Seb became a permanent fixture in the orchestra and at 13 years old significantly lowered the average age! 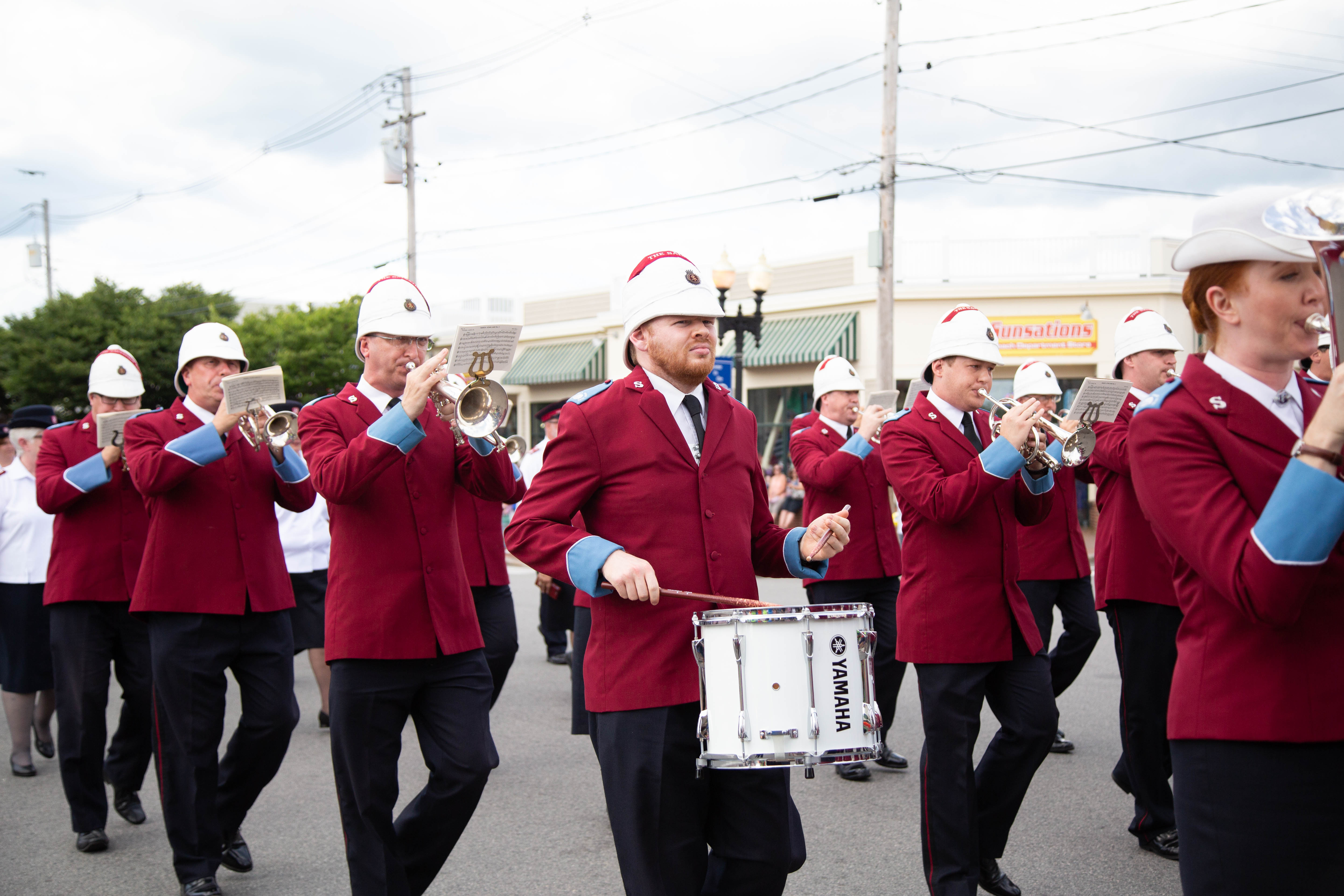 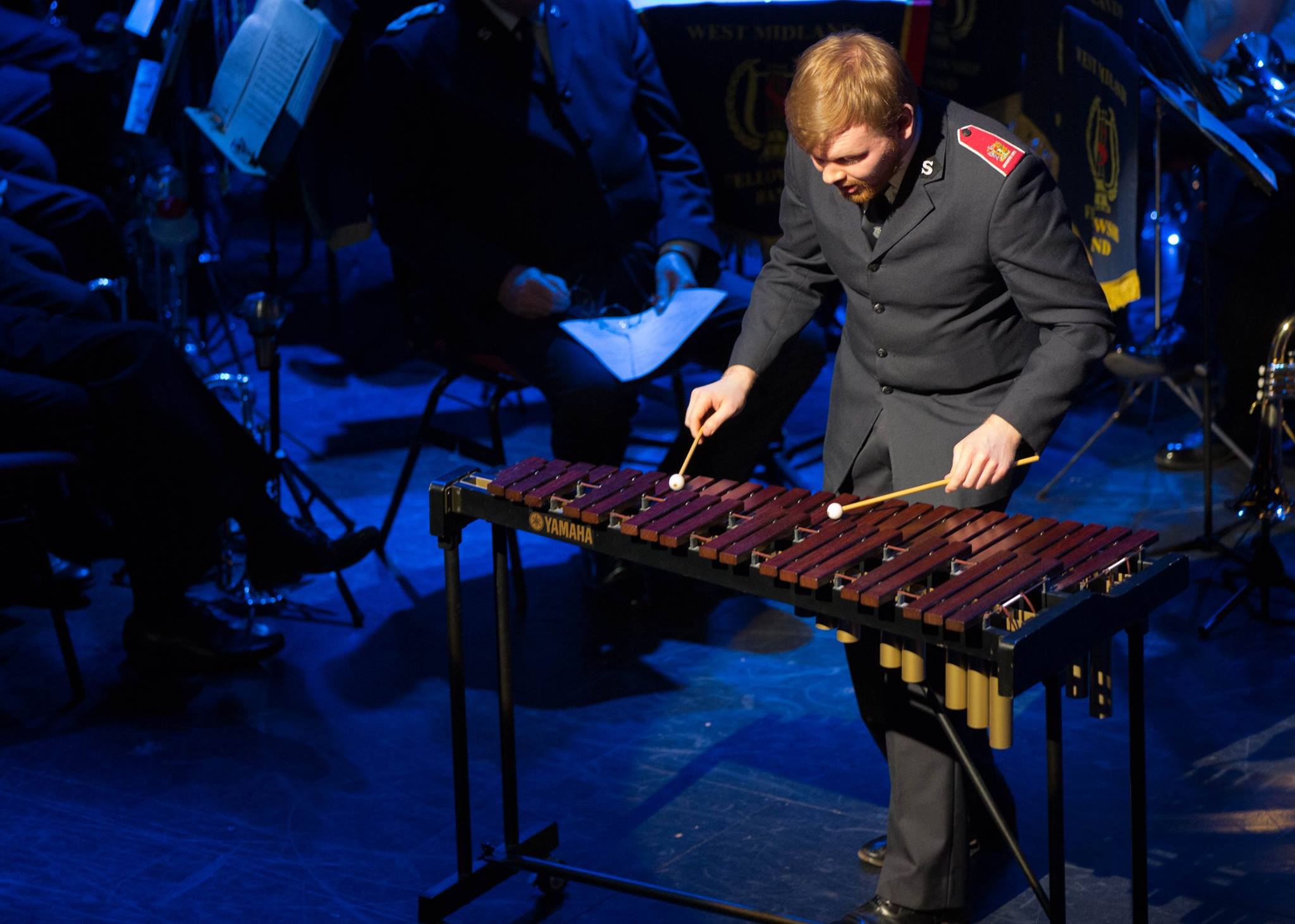 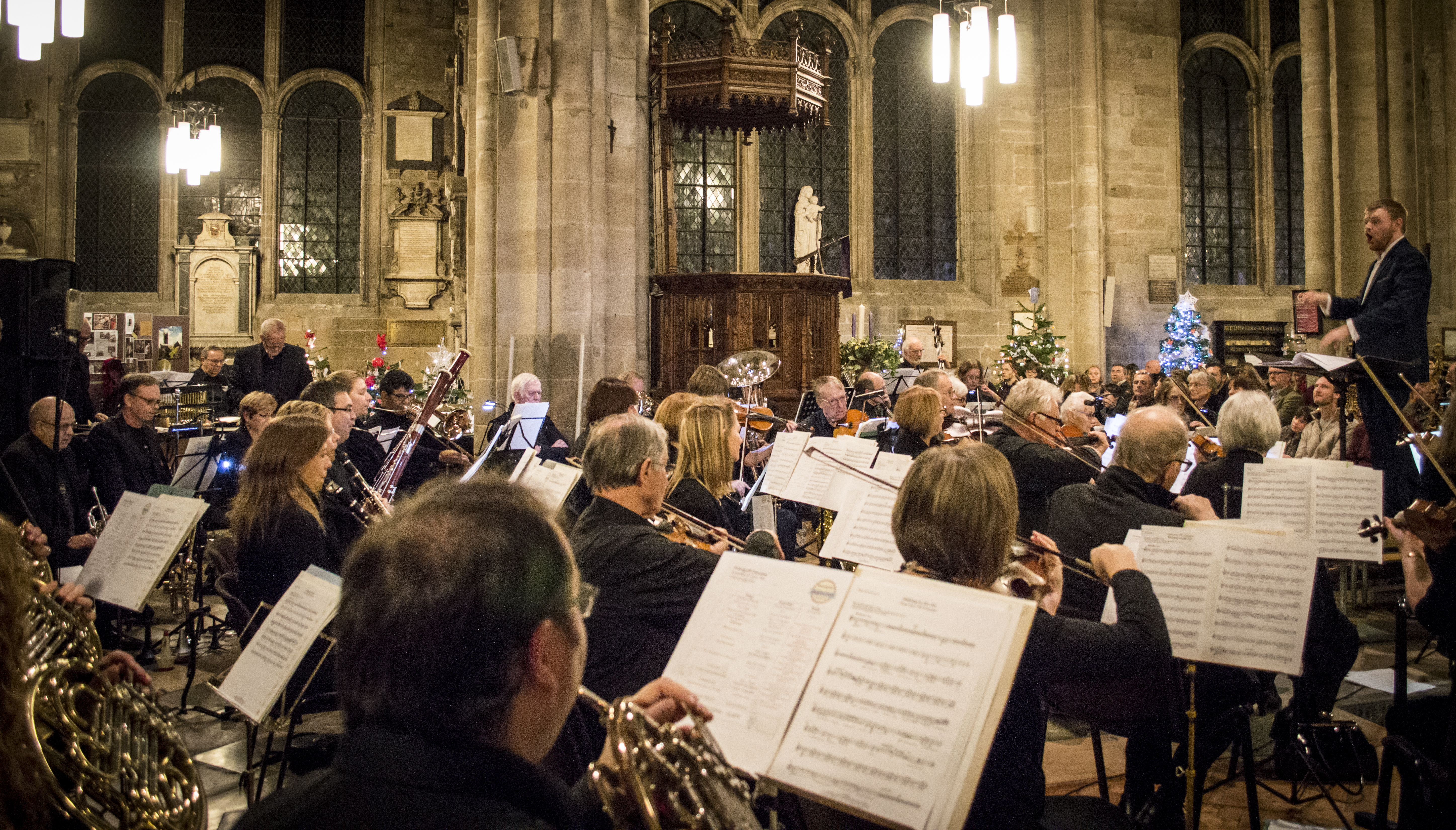 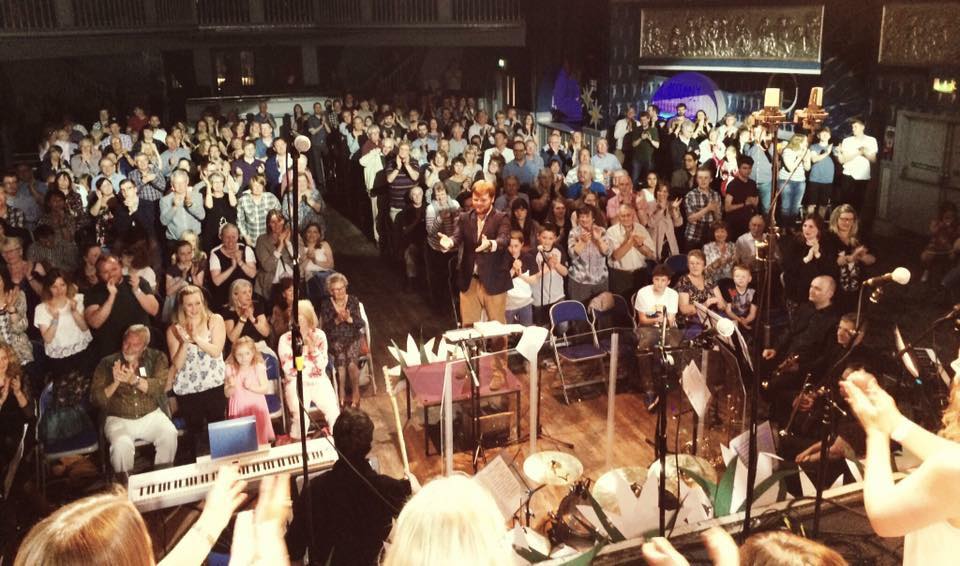